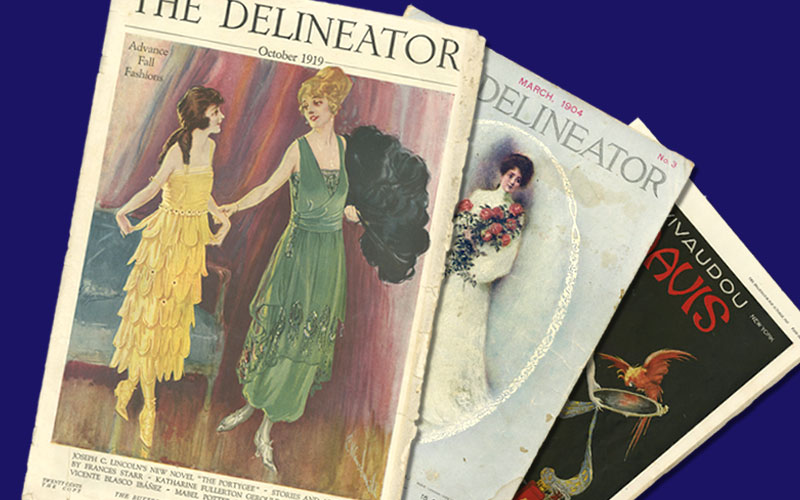 The MLC Archive is pleased to share the recent acquisition of nine issues of The Delineator, one of the foremost women’s and fashion magazines of the late nineteenth and early twentieth centuries. From 1873 to 1937 The Delineator devoted itself to fashion and culture, each issue brimming with depictions of the latest dresses, illustrated short stories, and articles on arts, social issues, and homemaking alike. Details of fashionable patterns available for purchase were always a major component of the magazine, which was in fact published by Butterick, prominent seller of sewing patterns. Despite this commercial footing, The Delineator did not hesitate to put itself on the side of women’s rights and was a staunch advocate of suffrage from the turn of the century. 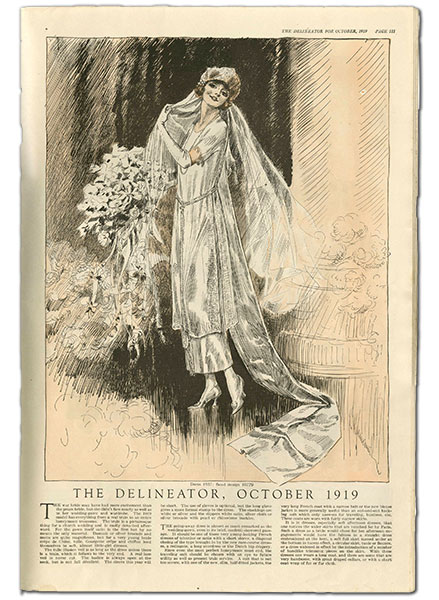 At the turn of the century, The Delineator began to publish select fashion illustrations on full colour plates. By the 1910s, the increasing numbers of colour plates began to be used primarily for advertisements—most of which still foregrounded the height of fashion. These two examples, one from 1901 and the other from 1919, also illustrate a second shift, this time societal: the Victorian, domestic conception of femininity, coloured in pastels, giving way to the bold colours and striking design of the modern new woman.

Indeed, the interactions of fashion with society, culture, and world events are evident throughout. This description of current fashions in wedding dresses in 1919, for instance, begins by alluding to recent experience of the home front:

“The war bride may have had more excitement than the peace bride, but she didn’t fare nearly as well as to her wedding gown and wardrobe.”

The illustrated pages of The Delineator offer copious insights not only into contemporaneous fashion and culture, but also into the interests, priorities, and concerns of its readers and the ways they shifted over the decades of its publication. Such magazines aimed at women are particularly important in this regard, opening windows into aspects of life other male-oriented media was prone to overlook. The MLC Archive’s issues of The Delineator join the variety of period women’s magazines in the collection to allow scholars a view into the richness of women’s social and cultural histories.

Scholars of art, fashion, and culture will greatly benefit from this acquisition to the MLC Archive. To donate original materials from the modernist era (1880 - 1940), or to conduct a research project on our holdings, please contact the MLC Archive at archive@mlc.ryerson.ca.