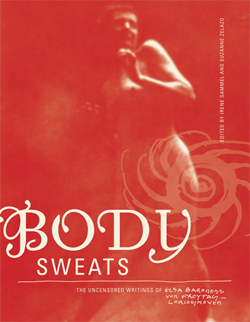 As a neurasthenic, kleptomaniac, and man-chasing proto-punk poet and artist, the Baroness Elsa von Freytag-Loringhoven left in her wake a ripple that is becoming a rip--one hundred years after she exploded onto the New York art scene. As an agent provocateur within New York's modernist revolution, "the first American Dada" not only dressed and behaved with purposeful outrageousness, but she set an example that went well beyond the eccentric divas of the twenty-first century, including her conceptual descendant, Lady Gaga. 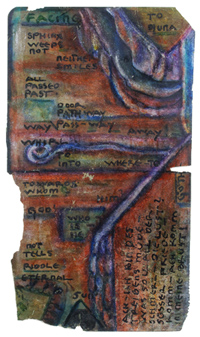 Her delirious verse flabbergasted New Yorkers as much as her flamboyant persona. As a poet, she was profane and playfully obscene, imagining a farting God, and transforming her contemporary Marcel Duchamp into M'ars (my arse). With its ragged edges and atonal rhythms, her poetry echoes the noise of the metropolis itself. Her love poetry muses graphically on ejaculation, orgasm, and oral sex. When she tired of existing words, she created new ones: "phalluspistol," "spinsterlollipop," "kissambushed." The Baroness's rebellious, highly sexed howls anticipated the Beats; her intensity and psychological complexity anticipates the poetic utterances of Anne Sexton and Sylvia Plath.

Published more than a century after her arrival in New York, Body Sweats is the first major collection of Elsa von Freytag-Loringhoven's poems in English. The Baroness's biographer Irene Gammel and coeditor Suzanne Zelazo have assembled 150 poems, most of them never before published. Many of the poems are themselves art objects, decorated in red and green ink, adorned with sketches and diagrams, presented with the same visceral immediacy they had when they were composed.

Suzanne Zelazo is a postdoctoral fellow at the Modern Literature and Culture Research Centre.

"I am as proud of your book today as it was published. One of my all-time favorites. I hope you hear that alot."        — Roger Conver, Executive Editor, MIT Press

... independent from exhibitions but intimately bound to art, are three new books of poems by artists. The wildest of the collections by far is Body Sweats: The Uncensored Writings Of Elsa Baroness von Freytag Loringhoven..., edited by Irene Gammel and Suzanne Zelazo. The baroness (1874-1927) was one of the outstanding lifestyle radicals of the early Dada era, or of any era, really; ... In addition to being an artist and a personage, she was a furiously witty and aggressively erotic experimental writer, as this first published collection of her poetry demonstrates.
— Holland Cotter, New York Times
End-of-year notable book for "Art Lovers, Volumes Meant to Awe and Inspire”

[T]he poems rush out with unnerving vivacity, lust, heresy, humor, and a musicality tuned pitch-perfect to the chaos of a city in capitalist rubato. Add in hefty strokes of wit, critique or wonder at the way things were, and the "Orgasmic Toast” she leaves us with – is it only a poem? — is more than enough for lunch.
— Allan Graubard, The Leonardo Review

Yes, Baroness Elsa in life and poetry was wild, and though she may have died many years ago her verse, heavy with portmanteaus, dashes, and (mostly) staccato lines of one, two or a few words each, all steeped in Elsaspirit – remains very much alive.
— Steven Fama, Blogspot.com

The annotations are rich ... the theoretical framework of the volume, which is broken into conceptual chapters rather than arranged chronologically, keeps the issue of the Baroness’s place in art and literature hopping, an open question, the Baroness herself living on, unsubdued.
— Brian Kim Stefans, Los Angeles Review of Books

The avid reader will find in these poems at least something connecting this work to just about every genuinely thrilling thing that has happened in American poetry in the last hundred years, from Black Mountain to the Harlem Renaissance to the New York School. And, like them, it still feels as alive and filled with possibility and surprise as it must have when it was first written and performed. - Gary Sullivan, Rain Taxi Review of Books

This is a long, awaited, much-needed collection of the exuberant and enthralling poetry of the great American Dada poet "Baroness" Elsa von Freytag-Loringhoven. The book is a sumptuous collection of poems and images, as much art catalog and text collection.
— Charles Bernstein, jacket2.org

The book is a wonderful accomplishment, and a testament to the Baroness' eccentricity.
— Samantha Marenghi, London Student, Europe’s Largest Student Newspaper

... a truly impressive work. … Gammel's and Zelazo's edition is a remarkable achievement, a document of literary history that resurrects [the Baroness Elsa von Freytag-Loringhoven] and argues for a recognition of her role in literary modernism and the Dada movement in particular.
— Jan Horner, The Winnipeg Review

[T]he poems rush out with unnerving vivacity, lust, heresy, humor, and a musicality tuned pitch-perfect to the chaos of a city in capitalist rubato. Add in hefty strokes of wit, critique or wonder at the way things were, and the "Orgasmic Toast” she leaves us with – is it only a poem? — is more than enough for lunch.
— Allan Graubard, The Leonardo Review

It should be noted in exuberant voice that the book Body Sweats, qua book, is a beautiful thing. This is to be expected from MIT Press… For this is the stuff of poetry, now again, when image is text and text is image.
— Vanessa Place, The Constant Critic: Timely Poetry Reviews

The publication of Body Sweats: The Uncensored Writings of Elsa von Freytag-Loringhoven is a landmark event for readers of poetry and scholars of Modernism for at least three reasons. Most basically, this book makes available for the first time the full range of Freytag-Loringhoven’s verse, allowing readers the opportunity to experience this remarkably innovative body of writing, with its striking imagery and startling sonic play. At the same time, Body Sweats makes a major contribution to the ongoing re-evaluation of the Modernist canon, forcing readers to enlarge their conception of avant-garde writing in New York (and elsewhere) in order to accommodate Freytag-Loringhoven’s achievements. Finally, Irene Gammel and Suzanne Zelazo’s editorial work foregrounds questions that are of interest to all those scholars who are currently working to make available the vast quantities of unpublished or little-circulated documents relating to the Modernist period.
— David Ten Eyck (Université de Lorraine), in Cercles

[I]t is the inventiveness of Freytag-Loringhoven’s work that makes these poems and this entire volume invaluable. For example, her radical use of neologisms places her smack dab in the middle of a great gathering of authors who explored similar linguistic elasticity around her time—such as Gerard Manly Hopkins, Samuel Beckett and James Joyce as well as authors who were part of the Dadaist, Surrealist and Futurist (both Russian and Italian) movements.
— Jennifer Dick, Drunken Boat

[T]he main corpus of the artist’s surviving work has finally been established. For those interested in the oeuvre of this necessary Dada artist, Body Sweats is a veritable treasure trove of information and a delight for readers interested in the colourful and still influential literary and artistic circles of early twentieth-century New York.
— Klaus Martens, University of Toronto Quarterly

"Body Sweats remaps the frontiers of modernism. It allows us to see, for the first time, just how radical Freytag-Loringhoven was: her linguistic fearlessness puts her in the same league as Mina Loy, Gertrude Stein, and Abraham Lincoln-Gillespie. These poems also offer a challenge to contemporary writers; a century on, her work is still as extreme as anything being published today."
— Craig Dworkin, Professor of English, University of Utah

"The Baroness' legendary but barely glimpsed 'omnipulsespun' oeuvre takes its place here as the most vital recovery of a neglected modernist since Mina Loy. Her panoramic 'arabesque grotesque' of sex poems, city poems, nature poems, sound poems, and an astonishingly rich visual portfolio is given an ingenious arrangement by the scrupulous editors, along with a poignant and sensible introduction. The Dada queen prankster comes to life at long last in all her 'stuttering incandescence.'"
— Jed Rasula, Helen S. Lanier Distinguished Professor of English, University of Georgia, author of Modernism and Poetic Inspiration: The Shadow Mouth

"Once rebuffed by William Carlos Williams and banished from Rutherford, exiled to Europe, where she lived in abject poverty and died, the iconoclastic Baroness, Elsa von Freytag-Loringhoven, has been brought to life by Irene Gammel and Suzanne Zelazo. An informative introduction for newcomers, a detailed set of notes on her poems for scholars, a generous presentation of her poetry, and, best of all, manuscript reproductions of her distinctively printed poems rescued from various archives—what a marvelous gathering at last for the magnificent Baroness, who deserves no less from all her admirers."
— Dickran Tashjian, Professor Emeritus of Art History, University of California, Irvine, author of A Boatload of Madmen: Surrealism and the American Avant-Garde, 1920-1950

"Just a note to say how much I appreciate finding both Baroness Elsa and Body Sweats – I have been tracking the Little Review because of the Ulysses episodes and your work does make me wonder whether LR was under scrutiny because of many of the pieces they published, not just the three Joyce episodes that were confiscated by the Post Office. You intimate that prosecutors were wise not to provide her a stage in public trial by including her works as ‘obscene’ in the indictment – were they that wise? My impression was that the SPV was as clever as a bull in a china shop, and, by the 1920s, in their swansong. At any rate, thanks – your works helped piece in some of the missing elements of the 1917-1921 LR issues."
— James R. Alexander, Professor of Political Science, University of Pittsburgh at Johnstown