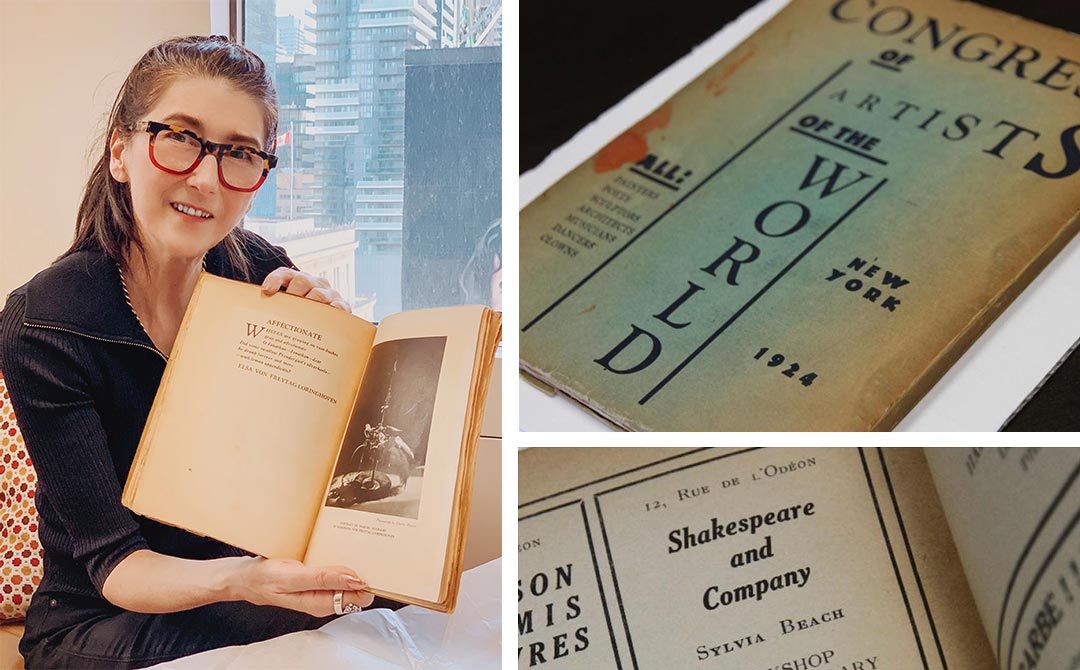 The early twentieth century was famous for daring experimentation in poetry, fiction, and visual art that found platforms in the networks of “little magazines” on both sides of the Atlantic in the 1910s and 1920s. Three original issues from two of the most prominent of these publications, the Little Review and transition, were donated to the MLC Archives dedicated to collecting and preserving the work of modernist women.

The bold Little Review was at the vanguard of modernist periodical publishing, founded in 1914 by editor Margaret Anderson, who was soon partnered, editorially and personally, with Jane Heap. It was the Little Review that first published Baroness Elsa von Freytag-Loringhoven’s work, starting in 1918, the same year the magazine began the sensational serialization of James Joyce’s Ulysses. In a similar vein, transition, founded in Paris in 1927 by American expatriates Maria MacDonald and Eugene Jolas, fostered literary experimentation, attracting the pens of major modernists. The MLC’s newly acquired issues of these magazines offer brilliant illumination of this literary world, threaded with Baroness Elsa’s striking presence.

On the cover of the Winter 1922 Little Review, a kinetic composition of letters spelling out the title catches the eye. The masthead declaims names of modernist icons: Margaret Anderson and Jane Heap, Ezra Pound, Francis Picabia. Turning the pages, one uncovers an essay by André Breton; poems by Apollinaire; reproduced artworks from Wassily Kandinsky, Fernand Léger, and John Storr.

Most arresting of all, however, is the spread, near the centre, pairing Baroness Elsa’s poem “Affectionate” with a photograph of her mixed-media assemblage Portrait of Marcel Duchamp. The short poem, printed in italics, clusters atop the lefthand-page, white space beneath; across the fold, the sculpture’s main mass, comprised of feathers and wire, rests low below a mostly empty field of black. The spatial effect binds the Baroness’s works together, while leaving ambiguous the points of connection. 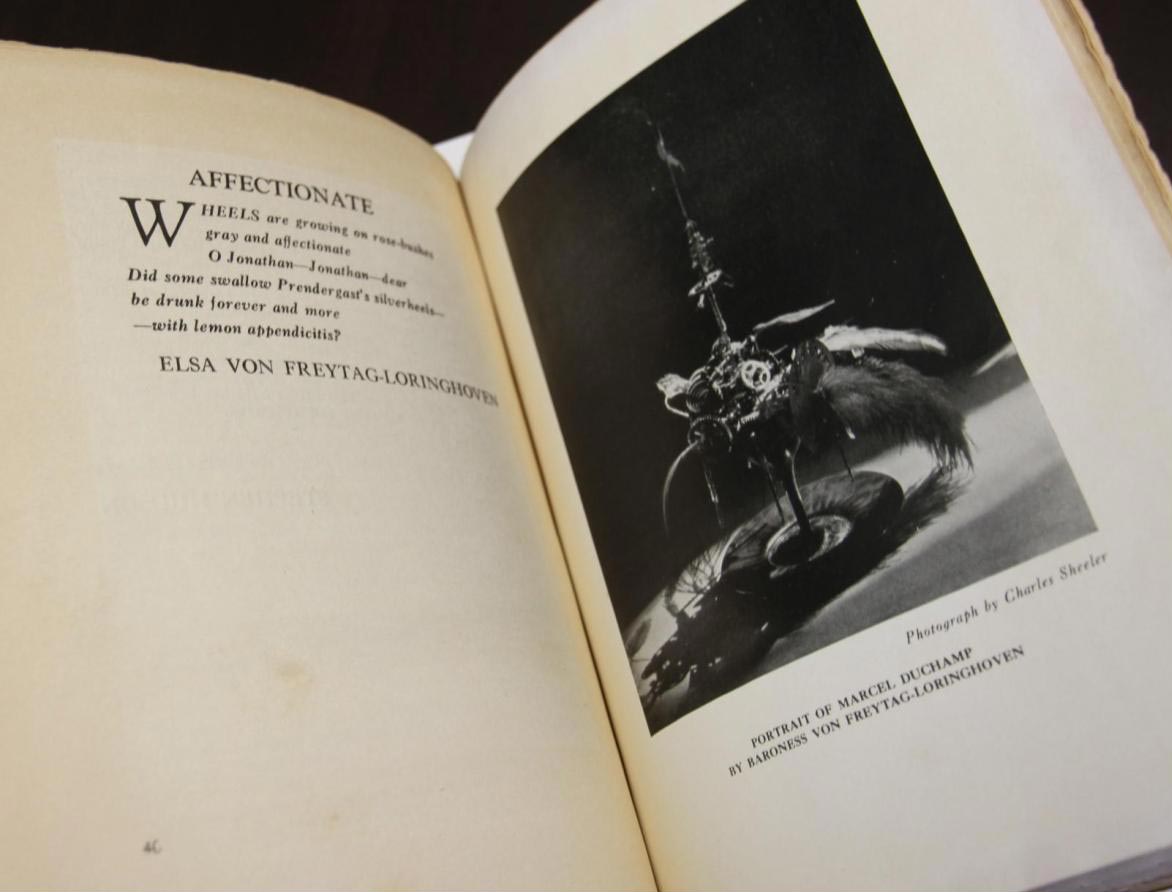 The first of the two issues of transition, from 1927, presents two of Baroness Elsa’s poems alone, face-to-face, one per page, the staccato of short lines and dashes accompanied again by broad white space. Even amongst the issue’s modernist company of James Joyce, William Carlos Williams, and Hart Crane, the innovation of the Baroness’ style shines. 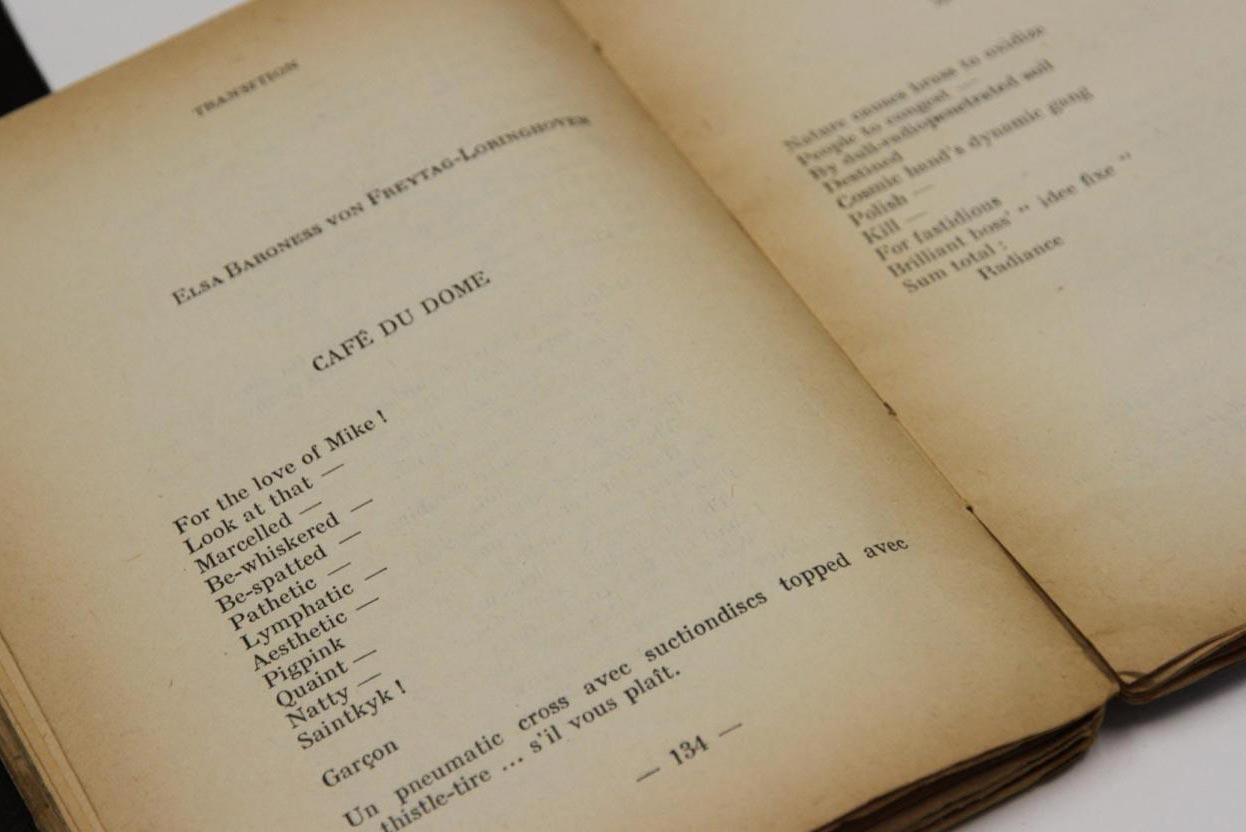 Compelling in a wholly different way is the presence of the Baroness in the 1928 issue. Here, her name appears first as a title, above several paragraphs from associate and intimate Djuna Barnes, framed in thick black: an obituary, following her unexpected death the previous December from gas asphyxiation. Subsequent to the eulogy are nine pages excerpted from letters written by the Baroness herself, held by Barnes, who describes them as “a monument to [Baroness Elsa’s] inappropriate end, in the only fitting language that could express it, her own.” Later in the issue, after an also-posthumous piece by Kafka, a glossy plate presents the stark photograph of the Baroness’ death mask.

Each of these issues is a true artifact of the modernist period, their bound pages capturing an ethos in their ink. To read a poem reprinted and anthologized has a significance different than that evoked by its encounter in context, ink pressed to the page by its first-ever typesetters, amidst flurries of new works by burgeoning modernists, plates of photomechanical prints, and ads for Shakespeare and Company.

“We are thrilled to be able to preserve these rare periodicals,” says MLC Director Irene Gammel, whose research files laid the foundation for the MLC Archives Modernism Collection. “These periodicals are a tribute to the work of women artists and feminist women editors, whose work needs to be studied further. Beyond giving these periodicals a proud home in the MLC Archive, our next step will involve 3D scanning of the objects so we can make them available on our website and share them with the world.”

These periodicals were donated to the MLC Archives by Heather Anderson, curator (with Irene Gammel) on The Baroness Elsa Project at the Carleton University Art Gallery. Anderson notes:

“I am so glad that these publications have found such a good home where passionate researchers can make use of them.”